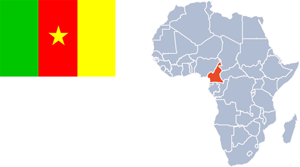 Tower Resources Cameroon S.A, a wholly-owned subsidiary of Tower Resources plc, holds a 100% interest (which is due to fall to 51% following completion of the farm-out which has been agreed subject to certain approvals) in the shallow-water Thali Production Sharing Contract (PSC) in the Rio del Rey basin, offshore Cameroon.

Tower was awarded the PSC on 15 September 2015, and has been granted an extension to the First Exploration Period to 22 May 2022, which followed the Company’s March 2020 declaration of Force Majeure due to the Covid-19 pandemic. The extension enables the Company to finalise the schedule for the drilling and testing of the NJOM-3 well which is expected to occur in Q1 2022.

The Thali PSC covers an area of 119.2 km², with water depths ranging from 8 to 48 metres, and lies in the prolific Rio del Rey basin, in the eastern part of the Niger Delta. The Rio del Rey basin has, to date, produced over one billion barrels of oil and has estimated remaining reserves of 1.2 billion boe, primarily within depths of less than 2,000 metres. The Rio del Rey is a sub-basin of the Niger Delta, an area in which over 34.5 billion barrels of oil have been discovered, with 2.5 billion boe attributed to the Cameroonian section. The Thali Block has the potential to hold at least four distinct play systems, including two established plays in which three discovery wells (Rumpi-1, Njonji-1 and Njonji-2) have already been drilled on the Block. 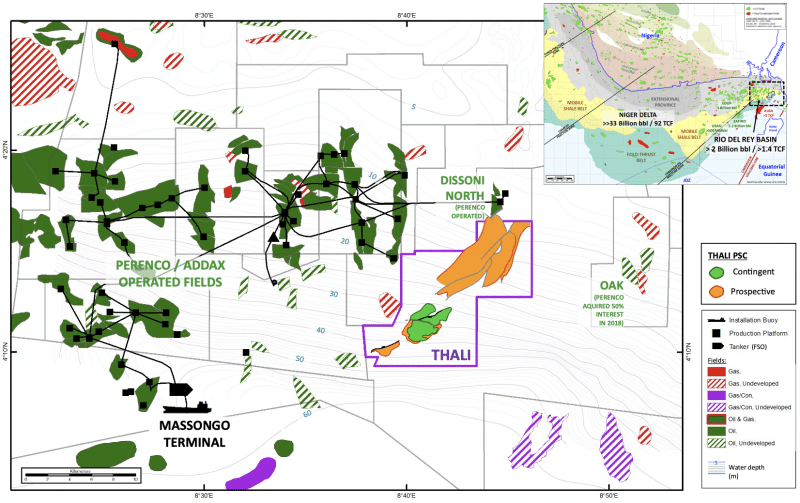 Following a comprehensive review of the subsurface dataset, including reprocessing of 3D seismic data by DMT Petrologic GmbH & Co KG, and detailed petrophysical analysis of wells in and around the block, Oilfield International Limited (OIL) were retained to conduct an assessment of the Thali licence prospectivity and produce a Reserve Report. In November 2018 the results of the independent Reserve Report conducted by Oilfield International Limited (OIL) were published, highlighting the actual and potential resources on the Thali licence and the associated Expected Monetary Value (EMV) of each of the identified prospects, as follows:

The range of volumetrics for each prospect are set out in the Reserve Report Executive Summary located at https://www.towerresources.co.uk/wp-content/uploads/2018/11/Oilfield-International-Limited-Cameroon-Assets-Reserves-Resources-Valuation-Report-Summary.pdf

The Reserve Report was updated by OIL in March 2020 using the much lower Brent crude oil prices prevalent at the time, with a summary of the report located at https://www.towerresources.co.uk/wp-content/uploads/2020/03/Summary-Reserves-Resources-Valuation-Report-Tower-Resources-Cameroon-Assets-Effective-Date-10th-March-2020-Publication-date-12th-March-2020-Final.pdf 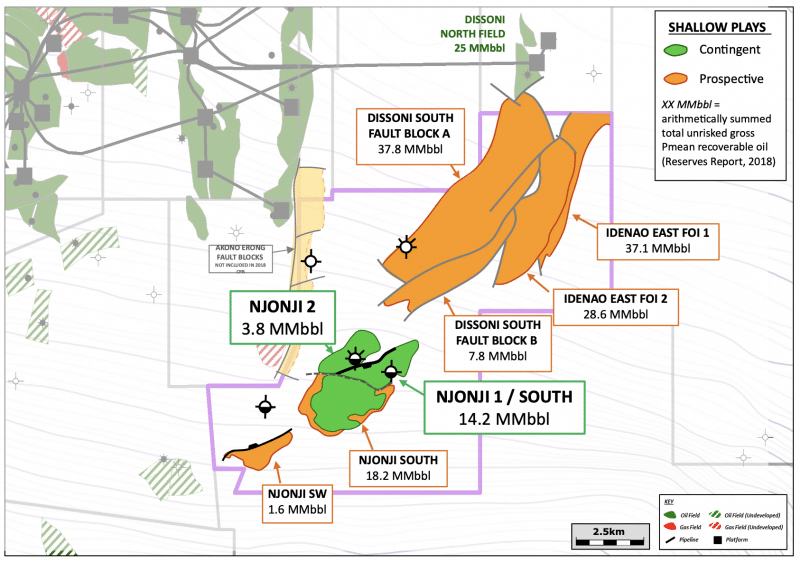 Reprocessing of the existing 3D seismic dataset completed in 2018 and the re-mapping and fault seal analysis resulted in larger than expected connected volumes, as set out on the OIL reports, and also highlighted the deeper prospectivity that exists on the Thali block. These turbidite and sandstone exploration plays are analogous to giant fields such as Alba and Zafiro which are on trend within the same basin. However, this deeper prospectivity has not formed part of the OIL reports. 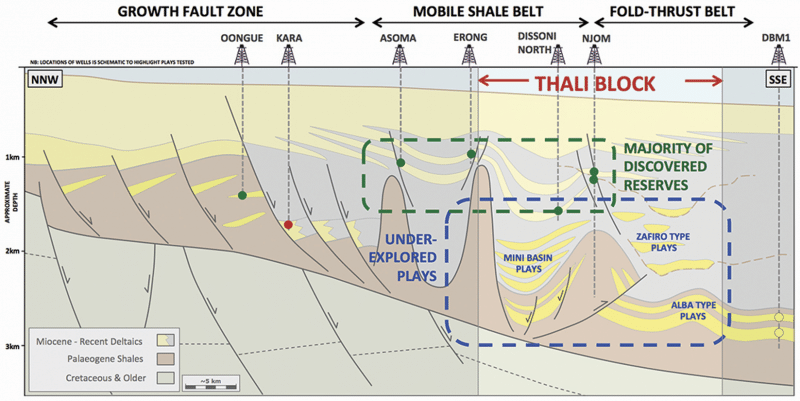 In August 2021 binding Heads of Agreement were reached with Beluga Energy Limited for a 49% non-operating working interest in the Thali PSC.

The farm-out covers US$15 million towards the cost of the NJOM-3 well that Tower is planning to drill on the Thali block in Q1 2022. In return for the financing Beluga Energy will receive a 49% working interest in the PSC, subject also to certain production-based payments to Tower as Operator. Under the terms of the farm-out agreement Tower and Beluga Energy will each recover costs actually funded and recoverable under the PSC with any costs in excess of U$15 million, and future costs, being funded pro-rata with respect to Tower’s and Beluga Energy’s working interests.

Completion of the farm-out is subject to certain financing contingencies requiring Beluga Energy’s shareholder approval and approval by the Minister for Mines, Industry and Technological Development, which are currently in process.

Preparations are under way for the drilling of the NJOM-3 well in Q1 2022 targeting the contingent resources of Njonji-1 and Njonji-2, with the aim of converting these resources into 2P reserves in the event of a successful drill stem test (DST) establishing flow rates from the reservoirs. The Environmental and Social Impact Assessment (ESIA) has been approved, long-lead items are on site and there is good rig availability in the region. Draft contracts are under discussion or already agreed with the main services providers, including potential rig contractors. 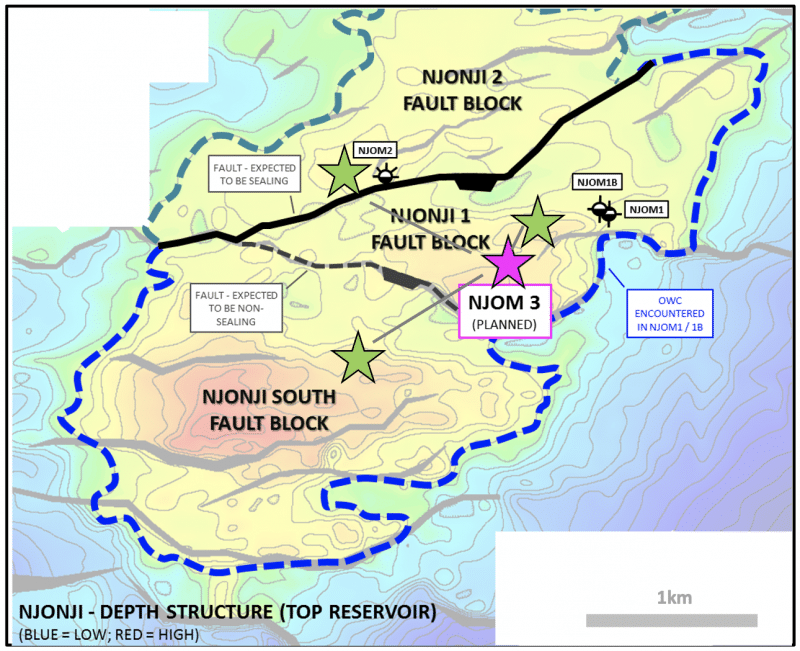 Once drilled the NJOM-3 well will be logged and a Modular Formation Dynamics Test (MDT) run followed by a DST to ascertain a test flow rate, recoverable volumes and other reservoir characteristics. Assuming that these steps are successful then NJOM-3 well will be suspended as a future production well and facilities will be installed under a Provisional Exploitation Authorisation (PEA) to commence production. A multi-well drilling programme will be undertaken with the drilling of an addition three further production wells with the objective to deliver first oil from the Thali licence in 2023, while continuing reservoir testing via a platform and Mobile Offshore Production Unit (MOPU). The design concept for the platform and MOPU is intended to allow the drilling of additional identified prospects on the Thali licence including at Njonji while production is underway from the Njonji-1 and Njonji-2 reservoirs. 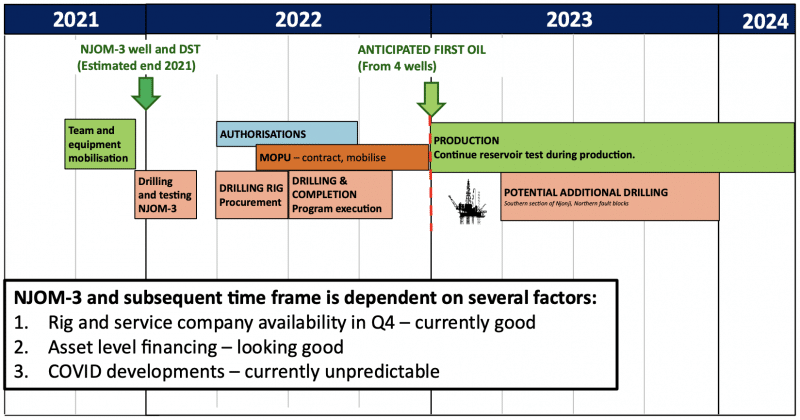