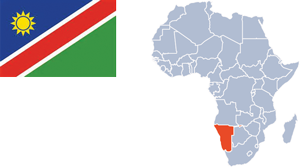 Tower Resources (Namibia) Limited, a wholly owned-subsidiary of Tower Resources plc, has signed a new Petroleum Agreement covering an 80% operated interest in Blocks 1910A, 1911 and 1912B. 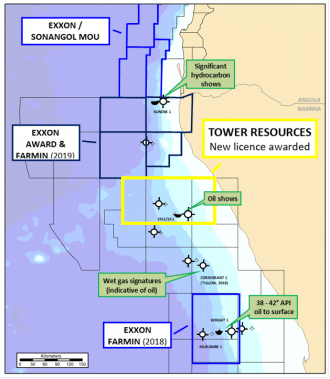 The blocks cover 23,297 km² of the northern Walvis Basin and Dolphin Graben (offshore Namibia), an under-explored region in which recent drilling results have proven the presence of a working oil-prone petroleum system, along with good quality turbidite and carbonate reservoirs. The new blocks are located directly to the north of licences in which ExxonMobil (‘Exxon’) and Africa Energy Corp (‘Africa Energy’) have acquired interests. In addition, Kosmos Energy have also recently farmed into Shell operated PEL39 in the deep-water Orange Basin.

In 2019, Exxon signed a new PSC covering blocks 1710 and 1810 in the Namibe basin and also farmed into blocks 1711 and 1811A alongside Namcor blocks adjacent to the north of Tower licences. They also signed an MOU in January 2019 with the Sonangol covering blocks 30, 44 and 45 across the border from Namibia.

Albian carbonate and Palaeocene / Upper Cretaceous turbidite reservoirs (proven in offset wells, e.g. 1911/15-1) have been identified in structural traps across the new blocks. These include giant (>1000 sqkm) 4-way dip closured structures (in the west) and structures within the Dolphin Graben (an area which well results indicate is likely to contain mature source rocks). Potential stratigraphic traps, associated with Cretaceous and Palaeogene basin floor turbidite systems, have also been identified across the area.

The Walvis Basin and Dolphin Graben are under-explored, with only nine exploration wells drilled to date in >90,000sqkm of basin. Of these wells, five were drilled in the mid-1990s in the Central (Dolphin Graben) and Eastern (continental slope) parts of the basin. Although historic drilling has failed to discover commercial quantities of hydrocarbons to date, wells have proved the presence of an oil-prone petroleum system, along with good quality turbidite and carbonate reservoirs. 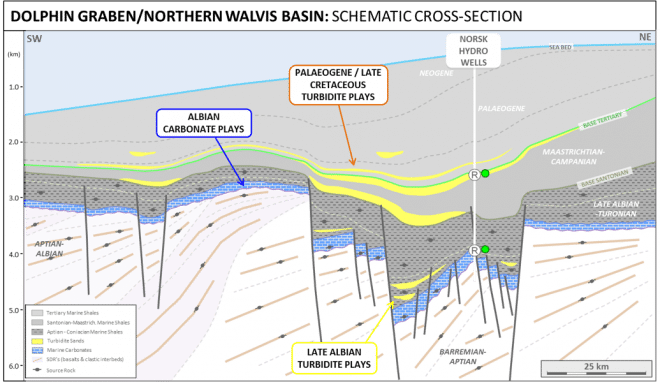 Two offset wells (1911/15-1 and 1911/10-1) located within the block were drilled by Norsk Hydro in the mid-1990s. These wells encountered thick Palaeocene, Maastrichtian and Campanian turbidite sands, three source rock intervals and 1911/15-1 recovered oil from Albian carbonates. Well failure is likely due to breached top seals.

More recently, three wells (targeting Cretaceous turbidite plays) have been drilled in the Walvis Basin, all of which strongly indicated the presence of an oil-prone petroleum system. The Wingat-1 and Murombe-1 (drilled by HRT in 2013) encountered two “well-developed source rocks, which are rich in organic carbon and are both within the oil-generating window”. 38º- 42º API oil was recovered to surface in Wingat-1. The Cormorant-1 well (drilled by Tullow in 2018) reportedly encountered turbidite sandstones reservoirs and wet gas signatures (‘indicative of oil’).

In addition to the Cretaceous turbidite plays being explored for by Tullow and others to the south, the 1911/15-1 well (located in the blocks) demonstrates the presence of good quality Albian carbonates (35m net thickness, 15-20% porosity). Biomarkers from migrated oils recovered from the carbonates indicate the presence of a lacustrine source system in the Dolphin Graben area, which may be analogous to the prolific Lower Cretaceous source systems offshore Brazil & offshore Angola.

Recent well results, in addition to surface seeps, provides clear evidence that oil has been generated and migrated in the basin and dispels the myth that offshore Namibia is solely a gas province.

Tower has identified multiple prospects and leads on the existing 2D seismic dataset, the majority of which comprise of multiple stacked reservoir targets, which could be penetrated with a single well.

Two giant four-way dip closed structural traps, with billion-barrel potential, have been identified and mapped on 2D seismic data. The anticlinal structures are situated on a regional structural high on the landward crest of the Walvis Ridge, surrounded by potential source kitchens in which mature oil sources have been proven by offset wells. The largest of the structures (the Gamma Prospect), has more than 1100km² of 4-way dip closure, with stacked reservoir targets including Palaeogene turbidites, Albian carbonates, as well as upside potential in deeper undrilled syn-rift Barremian clastics.

Significant potential has also been identified within multiple structural closures (50 km² to 125 km²) identified and mapped across the Dolphin Graben, all of which are located directly adjacent to source kitchens. More than eight 3-way fault dependent and 4-way dip closed structural traps have been identified so far, all of which have multiple stacked targets, which include Palaeogene and Cretaceous turbidites as well as Albian carbonates and deeper syn-rift clastics. 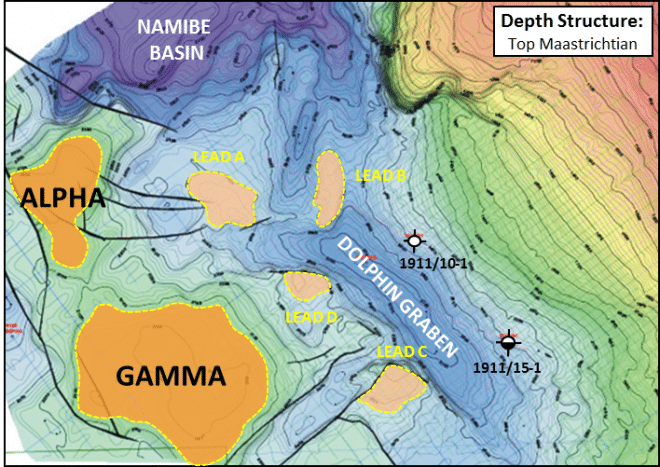 In addition to the structural plays outlined above, it is anticipated that stratigraphic plays exist within Cretaceous and Palaeogene intervals in the blocks, with potential for deep-water turbidite reservoir interbedded with mature source rocks (analogous to plays being explored for by Tullow and others in the southern part of the basin). These stratigraphic plays will be worked up as part of the Initial Exploration Period work programme.

An initial (unaudited) resource potential estimate for the six primary prospects and leads is summarised on an unrisked basis in the table below.

In 2012 Repsol farmed-in as operator, to drill the first exploration well in the license, on the block 2011 which is the part of the original license PEL0010 that is not covered by the new Petroleum Agreement. The Welwitschia #1 well, drilled in 2014, penetrated the Palaeocene, Maastrichtian and Upper Campanian sections, with logging evaluations indicating that reservoirs were less well-developed than prognosed. The well did not penetrate the deeper Albian Carbonate reservoir target. In 2015, the partners in PEL0010 agreed to relinquish the license, with all license conditions having been met.

The new Petroleum Agreement is structured to comprise an Initial Exploration Period of four years (which may be extended to five in appropriate circumstances), followed by options for the Tower and its partners to enter a First and Second Renewal Period of two years each. The work programme for the Initial Exploration Period comprises regional play fairway evaluation and acreage high-grading activities including CRS mapping, sequence stratigraphy, sedimentology and basin modelling, geochemical, gravity and magnetics analysis, 2D/3D seismic interpretation and mapping, and petrophysics and well failure analysis, based on a data base build comprising: