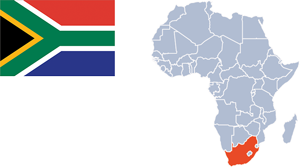 The Algoa-Gamtoos licence covers 9,369 km² and is operated by New Age Energy Algoa (Pty) Ltd (“NewAge”) (50%). This acreage straddles the Algoa and Gamtoos basins on the shelf, and the outboard slope edge of the South Outeniqua Basin, where Total has made its Brulpadda and Luiperd discoveries in its Blocks 11B/12B, which are adjacent to Algoa-Gamtoos to the West.

Recent geological evaluations have shown that the true hydrocarbon prospectivity of the basins covered by the Licence area has been largely unexplored by the drill bit, until Total’s successful 2019 and 2020 wells. Apart from these Total wells, all but one of the historical wells in the Algoa-Gamtoos area were drilled over 25 years ago, and all were located using sparse 2D seismic data and either failed to intersect valid closure and/or encountered only modestly developed reservoir sands where drilled on the fringes of the Algoa and Gamtoos basins. Many of these old wells, however, either encountered shows, residual hydrocarbons and/or penetrated stacked wet gas to oil-prone shale source sequences.

Importantly, Total’s 2019 and 2020 wells at Brulpadda and Luiperd respectively have successfully tested the Lower Cretaceous turbidite fan play of the Outeniqua basin slope, which has been interpreted by the Operator to extend along strike into the southern part of the Algoa-Gamtoos block. 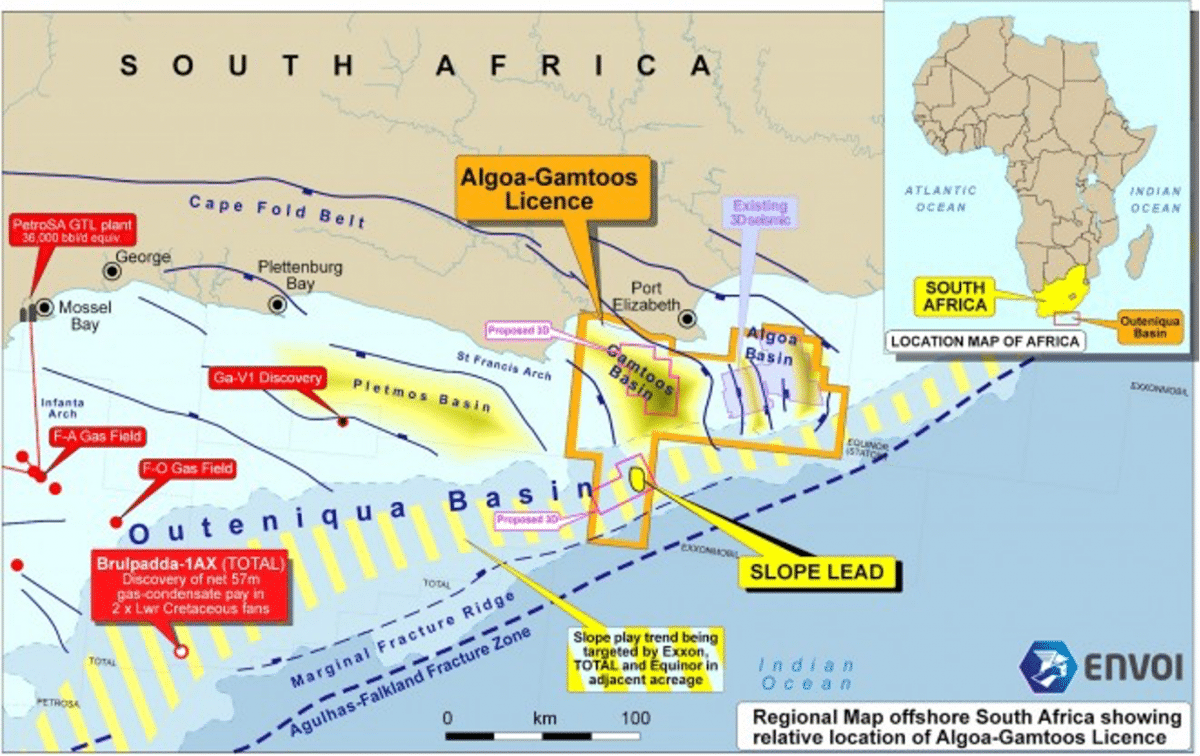 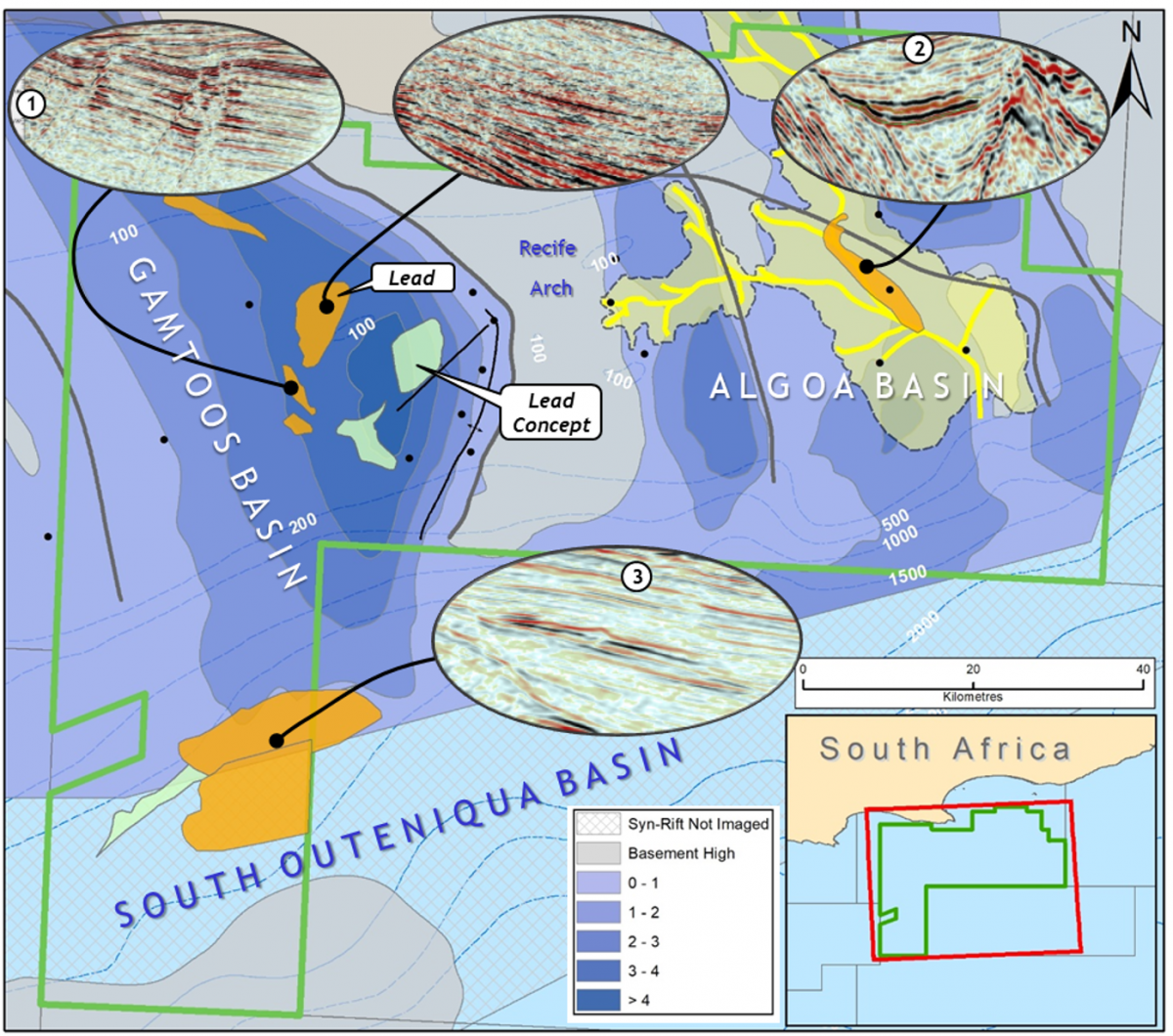 Further 3D seismic-led exploration is now planned, to map more accurately the most promising defined leads and make them ready for drilling.

A farm-out process has commenced to seek a partner for a material share of the licence working interest in return for funding the 3D seismic survey planned for the most prospective parts of the licence, and this process is being managed by ENVOI Limited.

NewAge was originally awarded the Licence as part of a larger Block in May 2009 under a one-year Technical Cooperation Permit (TCP), which was then converted to a three-year Initial Exploration Period in 2011. NewAge then reprocessed some of the existing 2D seismic ahead of acquiring an additional 1,787 km of new 2D data. This was followed by Rift Petroleum’s farm-in, shortly before its acquisition by Tower, and the acquisition of 658 km2 of 3D seismic over part of the Algoa Basin, fulfilling the work commitment of the Initial Exploration Period to December 2014. The approval to progress into the First two-year Renewal Period was awarded in December 2017.

The Algoa-Gamtoos Licence area itself has seen several phases of previous exploration resulting in coverage by various vintages of seismic data ranging back to 1975, and 20 wells. Soekor drilled 18 of these wells in the 1970s and 80s, and many of them encountered shows. However the new analysis clearly indicates most were drilled on the basin margins, while many are also now seen as having been located off structure on the old 2D seismic data. This data is now deemed inadequate to map drillable prospects accurately and to unlock the new and undrilled internal basin slope and canyon play potential where NewAge and Tower are now focusing their attention, particularly in the Gamtoos Basin. 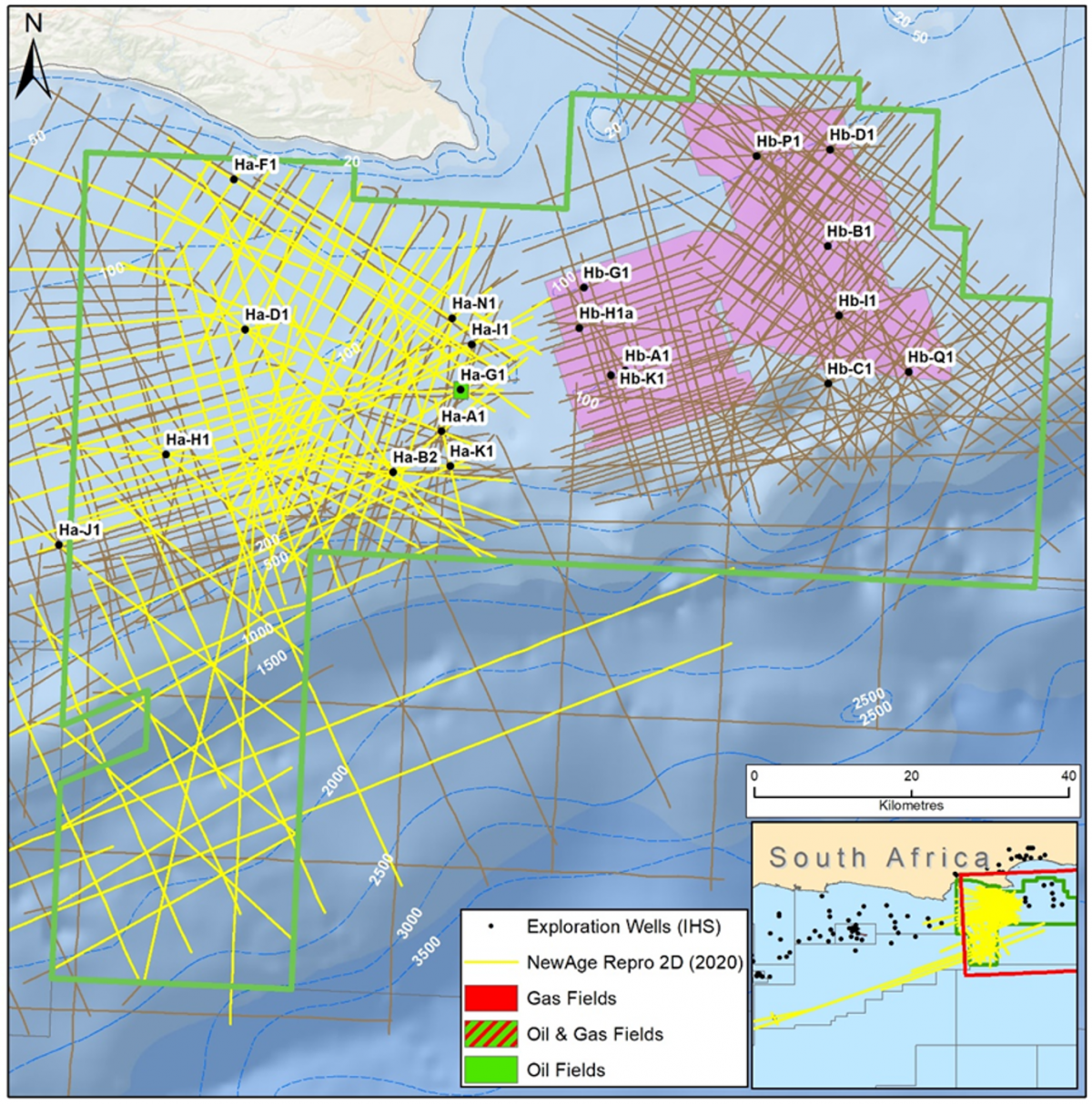 During the First Renewal Period, including a hiatus resulting from the implementation of the new Petroleum Law, further 2D data was acquired, including tie-lines to Total’s 2019 Brulpadda discovery in the Outeniqua basin, in its Blocks 11B/12B which are adjacent to the Algoa-Gamtoos license, to the West. This data was merged with existing data and reprocessed, allowing a much clearer picture of both the Algoa and Gamtoos leads which had already been identified (and a new substantial lead in the Gamtoos basin) and also the deep-water Outeniqua basin section of the license area. This identified the three key leads in the Deep-water Slope and Basin Floor Fan.

The Algoa and Gamtoos Basins are positioned at the eastern end of a series of en-echelon petroleum basins on the southern margin of South Africa, which developed during the Jurassic break-up that separated southern Africa from the Falklands Plateau of South America. The regions’ subsequent split and prospective syn-rift phase and two subsequent phases of the post-rift (‘Drift’) phases of tectono-stratigraphic evolution were responsible for producing the main hydrocarbon plays now being targeted. These phases of evolution and their petroleum systems can be summarised as follows:

These targets are contained and sealed within some 2,000 metres of Cretaceous sediments deposited during a period of relatively high subsidence and sedimentation rates that filled the Algoa and Gamtoos sub-basin areas. This period of basin development is characterised by mostly marine shelf deposition and erosion. Region-wide Aptian organic-rich shales of both marine and terrigenous origin, largely kerogen Type II with a Type I component, have been documented in the Outeniqua and particularly in the Bredasdorp Basin, where they have  been found to be over 200 metres thick.

Although a number of play concepts have been tested by the historic wells, only one was drilled in the Algoa or Gamtoos basins within the last 25 years and none were located using 3D seismic. These wells have nevertheless been instrumental in the new work and a revised understanding of both the basin geology and also the untested play potential now being defined within the grabens. As a result, five undrilled leads have been identified, mostly on the existing 2D data, targeting the new play potential in the Algoa and Gamtoos basins, and these have been much better defined by the further 2D data acquisition and reprocessing during the First Renewal Period. To date, none of the ‘bright’ amplitude events mapped in either basin have been tested by the wells drilled in the past. 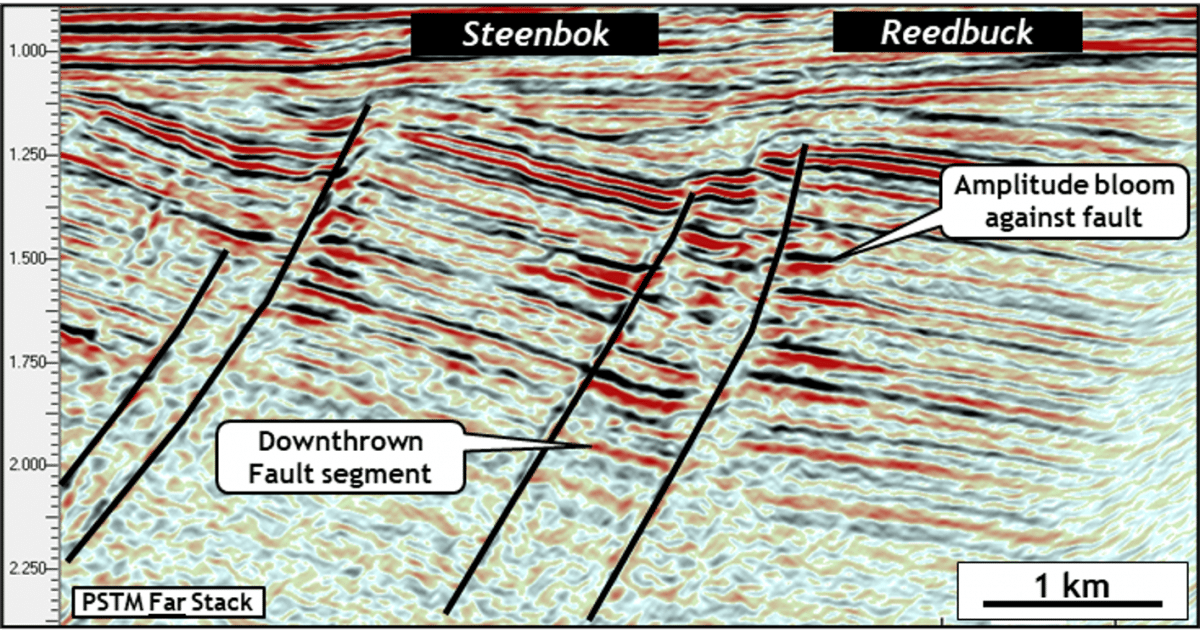 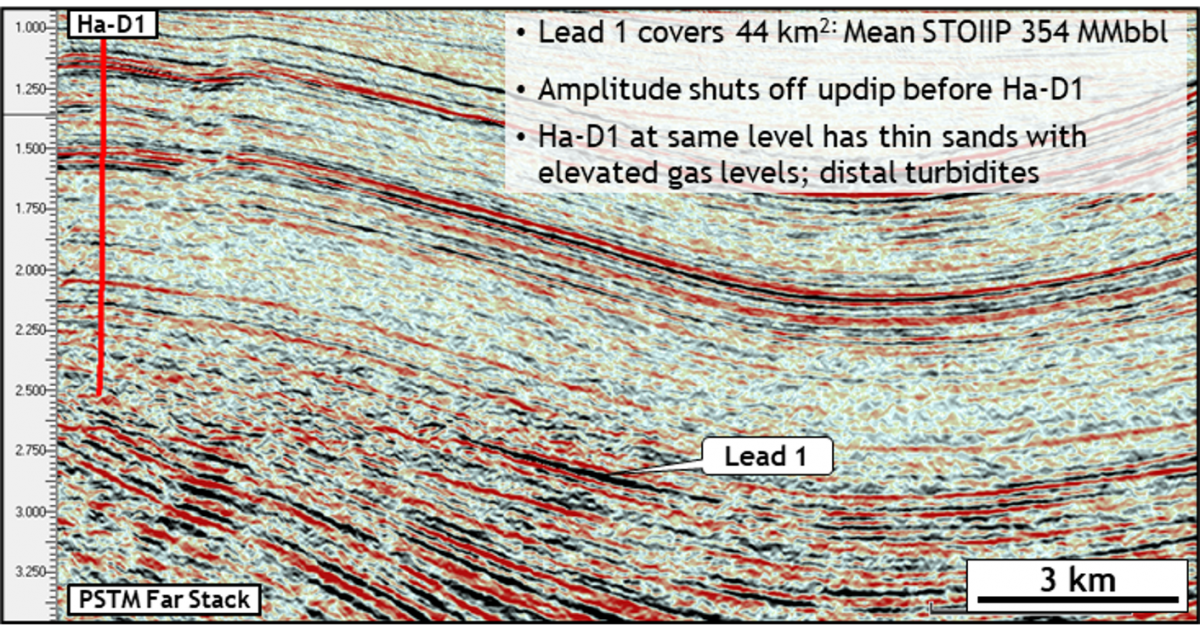 On 7 February 2019 Total reported a significant gas condensate discovery in Block 11B/12B, located in the Outeniqua basin, offshore South Africa. The well was drilled to a total depth of 3,633 metres and encountered 57 metres of net pay in Lower Cretaceous reservoirs, and with this discovery opens a new world class gas and oil play. Total have stated that they believe the new discovery could hold over one billion barrels of oil equivalent.

On 28 October 2020 Total reported a second major discovery in the Outeniqua basin with the Luiperd-1X well, which encountered 73 meters of good quality net pay in 85 meters of gross sands in well-developed Lower Cretaceous reservoirs.The well was reported by Total’s partners to have reached a maximum constrained flow-rate of 33 million cubic feet per day of natural gas (‘MMcfpd’) and 4,320 barrels of condensate per day (‘bcpd’), an aggregate of approximately 9,820 barrels of oil equivalent per day (‘boepd’). Current indications are that the Luiperd discovery is larger than the 1 billion boe Brulpadda discovery announced in 2019.

Block 11B/12B is located adjacent to the Algoa-Gamtoos licence and the Algoa-Gamtoos block also contains the southern deepwater basin margin of the Outeniqua Basin that was targeted by Total’s Brulpadda and Luiperd wells and is approximately 150 kms along strike to the east from the those discoveries.

In the deep-water Outeniqua Basin section of the Algoa-Gamtoos license, the Operator has identified three separate prospective reservoir targets along the deep-water slope: 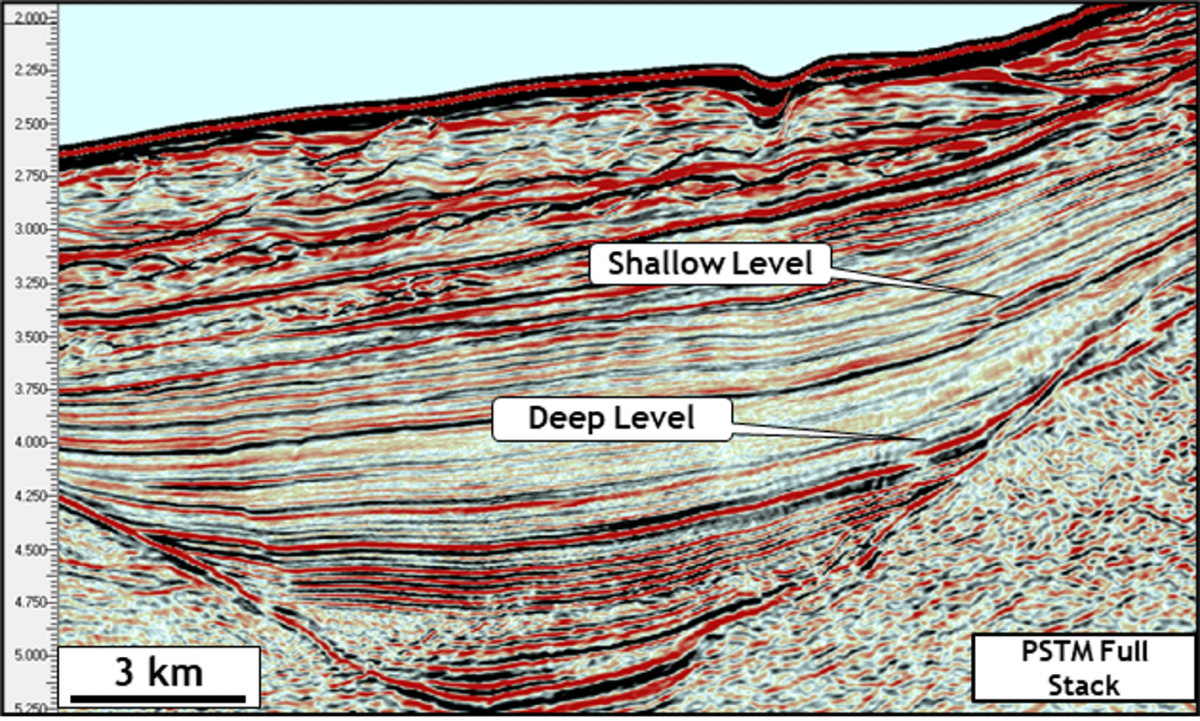 The updated (unaudited) prospective resources estimate, prepared to the SPE-PRMS resource classification standard by the Operator for the six primary prospects/leads and three reservoir targets within the deep-water slope and basin floor fan system identified, are summarised on an unrisked volumetric basis in the table below, and in the map that follows. 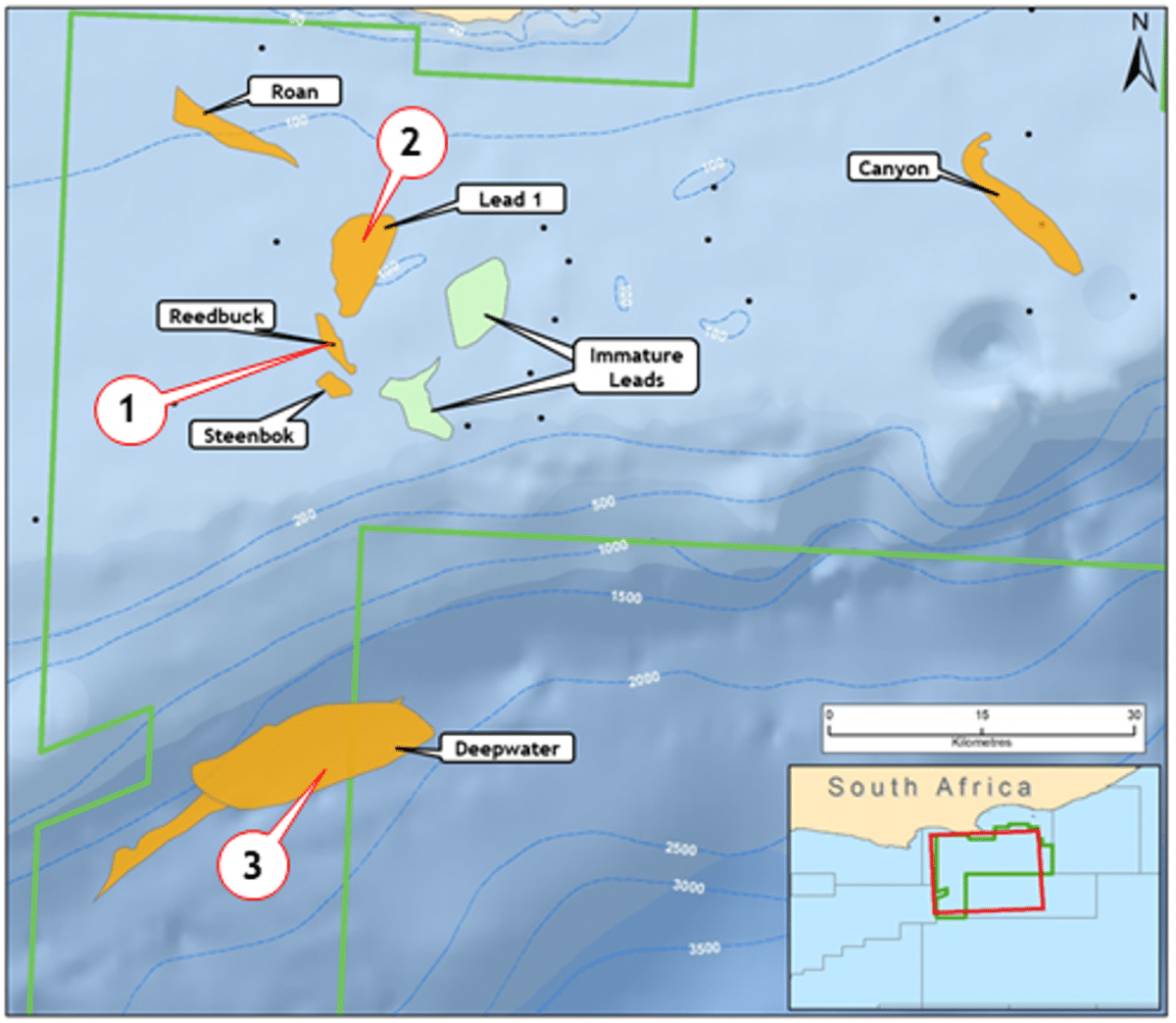 A new 3D seismic survey is planned, with a view to completion by the end of 2022 unless deferred into the next Renewal Phase of the license, covering the Deepwater section of the license and/or some of the lower-risk leads in the Gamtoos basin section. This would be the 2nd of three two-year renewals requiring additional work commitments involving seismic and, ultimately, a well in the 3rd Renewal Period.

Envoi, on behalf of the Operator, New Age, and Tower have been contracted to facilitate a farm-out of equity in the licence, and a data room is currently open. 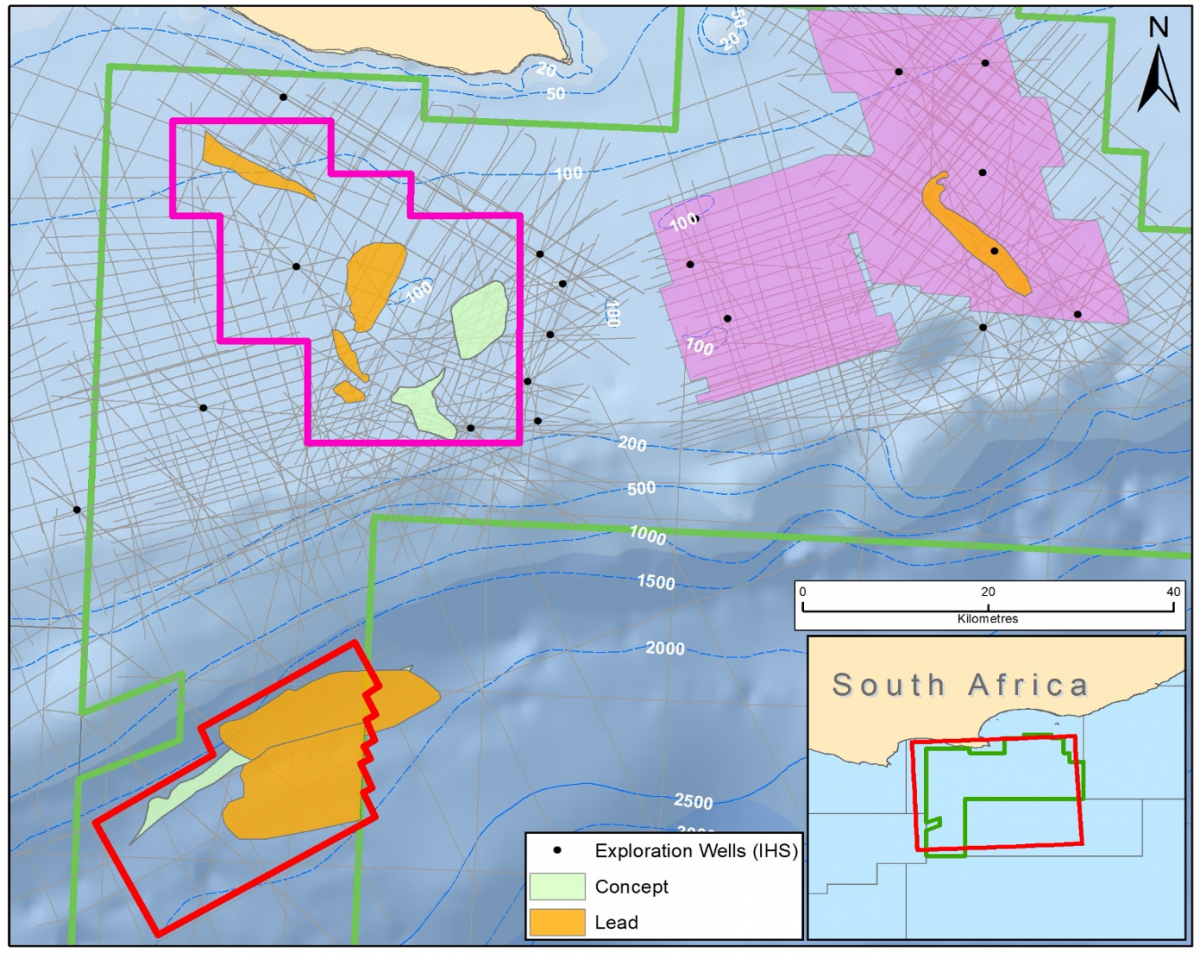