Tower Resources (AIM:TRP) is pleased to provide an update in respect of its Uganda operations.

Neptune Petroleum (Uganda) Limited ("Neptune") the wholly-owned subsidiary of Tower Resources plc has agreed with the Government of Uganda the location for the second exploration well in Uganda Licence EA5. The well, which is named Avivi-1, is to be located 3km northwest of Rhino Camp town.

The well has a primary stratigraphic target interval below 665m and a secondary target interval which is immediately above expected basement at a depth of 795m. The higher interval is targeted to encounter high quality fluvial sandstones, similar to those found in the successful wells in Licence EA1, adjacent to EA5, but which were absent in Tower’s first exploration well, Iti-1. The deeper prospective interval may have productive alluvial sandstones similar to those encountered in the basal reservoir at Iti-1. Information from the Iti-1 well, sedimentological studies and detailed re-evaluation of seismic data points to the area east of Iti-1, within the hinterland of the existing River Nile, as being most likely to contain a thick sequence of sediments with good quality reservoir development.

Enquiries are now well advanced to acquire a drilling rig to drill Avivi-1 with a planned spud date by 1st February 2010. Activities have begun to prepare an Environmental Impact Assessment for approval by the Ugandan Government.

Tower is also pleased to advise its shareholders that Global Petroleum, which funded most of the cost of Iti-1, has decided to maintain its option to earn a 25% Licence Interest by funding 25% of the cost of Avivi-1. The funding of the well is fully secured and it is not presently intended to introduce additional partners.

"The results of the Iti-1 well and subsequent evaluation work have greatly improved our understanding of the EA5 basin. Avivi-1 is well placed to have good quality reservoirs and proximity to the most likely source and migration paths. I am also very pleased that Global Petroleum is maintaining their interest by participating in the well." 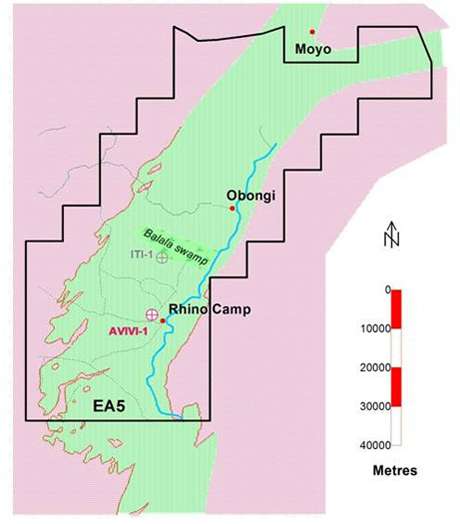