Statement regarding the results of the Wingat-1 exploration well, Walvis Basin, Offshore Namibia

Statement regarding the results of the Wingat-1 exploration well, Walvis Basin, Offshore Namibia

Tower Resources plc (“Tower” or the “Company”), (TRP.L, TRP LN), the AIM listed oil and gas exploration company, notes the announcement dated 20 May 2013 from HRT Participações em Petróleo S.A. (“HRT”) regarding the results of the Wingat-1 well, which has reported encouraging results from the Walvis Basin, offshore Namibia. Tower believes this well result offers significant encouragement for its Welwitschia-1 well, scheduled to be drilled in the first half of 2014.

HRT announced that the Wingat-1 wildcat well was drilled to a total depth (TD) of 5,000 metres and, whilst not encountering commercial quantities of oil, recovered four 450 cl samples of light 38 to 42 degree API oil from thin sands of undisclosed age. It drilled through two ‘well-developed source rocks, which are rich in organic carbon and both are within the oil-generating window’. The principal target of the well, a carbonate reservoir in the Albian, was not as well developed as HRT had anticipated.

Wingat-1 is located in Petroleum Exploration Licence 23 (“PEL 23”) in the south of the Walvis Basin, some 200 km south of Tower’s multi-billion barrel Welwitschia-1 prospect, which is to be drilled by mid-2014 in PEL0010 by its operator, Repsol. 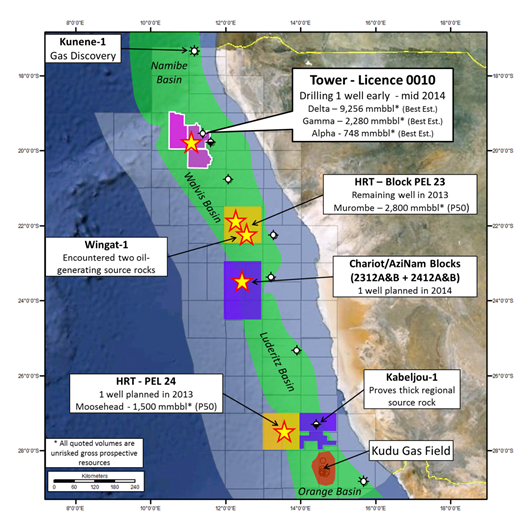 Offshore Namibia remains exceptionally under-explored, with just 12 wildcat wells drilled along a coastline of 1570 kms and one of the key uncertainties remains the distribution of mature oil prone source rock. The Wingat-1 well provides clear evidence that oil has been generated and migrated, and is especially encouraging in identifying not just one but two source intervals, both in the ‘oil window’.

Tower’s Welwitchia-1 well has multiple reservoir targets from the Palaeocene to the Aptian. A CPR published by Oilfield International in October 2011, attributed net risked recoverable resources of 458 mmboe to Tower’s 30% interest in this first prospect alone, which is just one of four large dip closed prospects within the acreage. It is located close to the 1911-15/1 well drilled in 1994 by Norsk Hydro, which recovered oil from core samples in the Albian.

Jeremy Asher, Tower’s Chairman, commented: “This result is very encouraging for the future potential of the Walvis Basin and for our upcoming well. Although the chance of success at any individual prospect depends on several factors, the presence of more than one mature source rock interval significantly reduces the overall risk in the basin, and should encourage additional exploration activity. We hope that this result, along with additional evidence from seeps and other offset data, such as the Norsk Hydro well, will also dispel the myth that Namibia is solely a gas province, and we look forward to the result of HRT’s next well in the Walvis Basin, Murombe-1.”